At the moment LSU looks to be the most likely team to be traveling January 7th to New Orleans for the BCS national championship game...sorry Oklahoma, you're just one of many to defeat a number 1 this year. I'm sure there will be a lot of bitching and moaning from all the teams who don't get to play in the game. Most of them will be complaining about the Big 10 and our lack of a championship game. Well WV and Mizzou, if you were so damn good how do you explain your losses. I know, Pitt is a tough team...even if they were only a 28 point underdog and you played at home. And Oklahoma...well Mizzou....just no excuse. 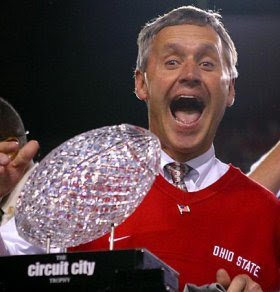 I'm glad we're not playing either Mizzou or WV. I'm really glad we're not playing USC in the Rose Bowl...Pasadena you'll just have to wait. At least LSU has some national respect being the SEC champions. This will be a real game. Ohio State has their work cut out for them. I'm sure Tressel and team are up to the challenge... see how happy Jim is when he wins. We need another crystal ball. But first OSU needs to kick LSU's ass...or whoever the BCS picks.