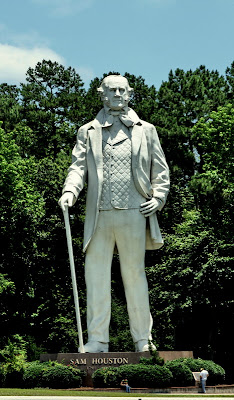 Here's a picture of the huge statue of Sam Houston. It sits on a 10 foot platform. There are some people near the bottom to give you an idea of how big this thing really is. It was designed and build by David Adickes. You can follow the link above to read more about it.

Or, finally finding a purpose.

Well I’ll be passing through Huntsville, Texas on my way home tomorrow. Huntsville, besides being the last destination of the worst criminal offenders in Texas it is also the home of the Sam Houston State University, the Texas Prison Museum, Sam Houston National Forest, and the largest statue of an American hero (67 feet tall), Sam Houston and of course the last home of Sam Houston, governor of two states, Tennessee and Texas and the only President of the Republic of Texas. He was born in Virginia died in Texas and in between defeated Santa Ana to liberate Texas and was forced to resign as governor because he didn’t want to secede from the US and refused to take the oath of allegiance.
With any luck I’ll remember to take a picture of Sam on my way home…it is an impressive statue. Almost as big as the man himself…we are in Texas.

I keep forgetting that I do travel where many people don’t. Not just places like Sydney, London or Tokyo but Lawton, Oklahoma or Victoria, Texas or Bentonville, Arkansas. On my way to these places I pass through a big part of our country. Some are pretty or impressive in their own way…some aren’t. Some are worth seeing again some aren’t. That holds true where ever I go, here or abroad. I made a big deal about seeing a kangaroo yet I never saw a prairie dog colony. They, the latter, are everywhere here (Lawton)…just didn’t notice, never thought about them. Here prairie dogs are a pest just as kangaroos are in Australia. I just need to see things like I once did. What is common place to me is not so to others. Maybe…a big maybe…this blog is finding a purpose. We’ll see. In the mean time just give me a damn beer.

I’m working at this weekend. It is located near . is a small town that probably wouldn’t exist without the presence of this military base. Well, it might but it would be even smaller.
Anyway, I’ve been here 3 days now and I’ll be heading home tomorrow morning. I would have left tonight after the shoot but we have rooms here and need to stay, they’re paid for.

So far the most “exciting” thing to happen is the discovery of a prairie dog colony (?) next to the motel. I saw them this morning as we were leaving for the shoot. I guess I wasn’t paying much attention the past few days since they didn’t just move in last night.
I know it doesn’t sound like much but I’ve never seen a colony of them up close. There is a field next to the parking lot here and that is where they’ve made their home. I’ve taken some pictures of them. They’re a skitterish bunch. They wouldn’t pose so I got what I could. 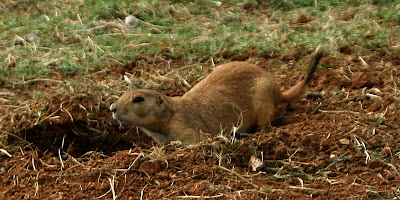 Here's one not too sure if he should hide or not. 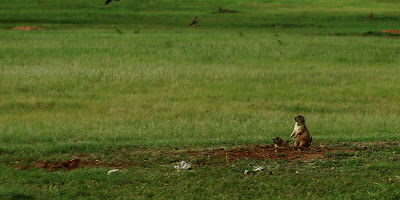 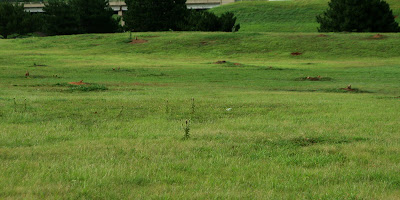 Here's a couple of shots of a small part of the colony...exciting stuff...