Katsuren Castle and the Haunted Hotel 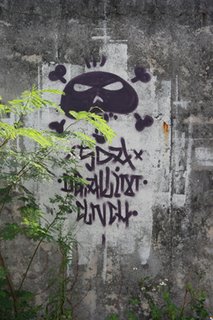 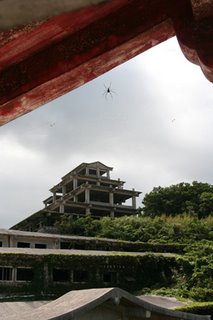 As I had mentioned in an earlier post I started this whole Japan odyssey on Okinawa in September. The thing that struck me as odd in Okinawa is the whole fascination with ghosts and ghost stories.
I think this has to do with the Japanese and not just the people on Okinawa. However, there seemed to be a lot of stories of ghosts and hauntings on Okinawa.
Back in September I met a couple at Kadena AB, Melissa and Jorge. They took me to see Katsuren Castle ruins. The castle dates from the13th century. Nearby is the never completed skeleton of a very large hotel/resort.
Jorge and his buddies play some kind of war games with pellet guns at the hotel so he knows his way around pretty good. He’s also heard a lot about the history of its construction…or attempted construction. 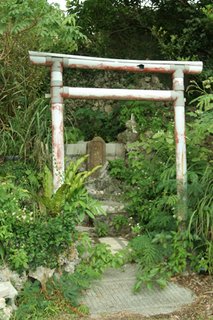 The story goes that a businessman from Naha started the construction in or around 1975. During the construction some of the workers quit after learning they were building on “sacred” ground (there are a few shrines and tombs around the grounds of the hotel). Construction continued and was finally stopped after workers started dying in strange accidents.The story continues with the businessman going insane then finally dying. The story is unclear if the Naha businessman started off insane or went insane later.

The whole arrangement of the structure is odd. Some say there weren’t any real blueprints to follow during construction. This is easy to believe. Some hallways lead off to nowhere and when climbing some of the stairways you need to be careful not to bump your head.

If you dare, climbing to the top offers a great view. Looking towards the west you see the East China Sea and east the Pacific. Okinawa is fairly narrow here.

The place is a bit spooky even in the middle of the afternoon. I’m told many Okinawans won’t go near the place. Personally, I wouldn’t go there at night.

The first picture is of graffiti on one of the walls…as before I have no idea what it says. Second is a shot of part of the hotel complete with a huge banana spider (these spiders are everywhere). Last is a picture of a shrine along a walk next to the hotel.

I’m searching for more information on this hotel. If I find anything I’ll be posting an update…later.