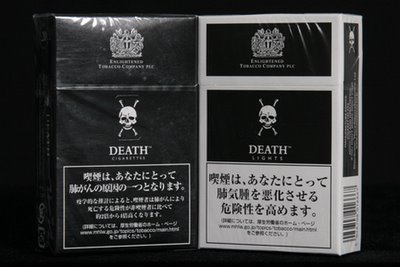 I found something interesting on my way from Atsugi to Yokota…actually the woman driving me there told me about them. There’s a little shop on that sells cigarettes and various other things. There I bought some cigarettes called Death and Death Lights…truth in advertising taken to the extreme (as you can see from the packaging). I doubt this sort of thing would go over very well with the American cigarette manufacturers. I have no idea where these are made…can’t read Japanese. I have tried to quit smoking a couple of times…I think I’ll be trying harder to quit. This has nothing to do with Death and Death Lights, however, it does make a strong case for quitting.

For those of you who have never been to you can buy cigarettes and beer from vending machines on the street. I can’t see something like this working in the States. The machines would be robbed as soon as they were put on the street…of course, there are other reasons it wouldn’t happen.

I almost forgot. For those of you who prefer death to leave a bad taste in your mouth you can purchase Death Menthols.

Enough of this. I need a new topic…later.